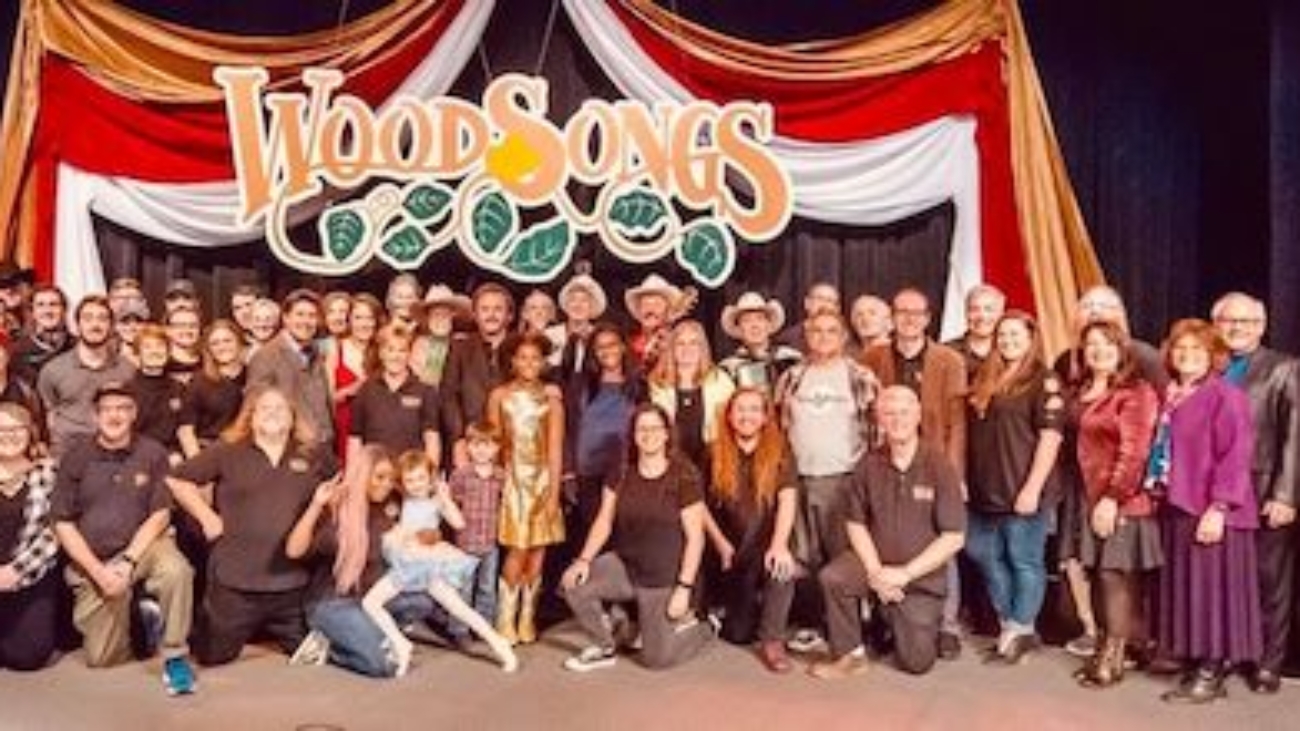 This FREE & open to the public event takes place on Saturday, April 30 at 1pm at Kentucky Music Hall of Fame during the 2022 National Gathering of SongFarmers in Renfro Valley

Photo gallery from past WoodSongs & SongFarmer events and gatherings [view/download]

RENFRO VALLEY, Ky. (April 19, 2022) – The 12 foot wide WoodSongs Old Time Radio Hour stage sign will be dedicated as part of a special history exhibit set to be unveiled at the Kentucky Music Hall Of Fame on Saturday, April 30 at 1pm ET in Renfro Valley, Kentucky during the 2022 National Gathering of SongFarmers, organized by the WoodSongs Front Porch Association.

The original WoodSongs sign was used through 1000 live audience broadcasts since 1998, when Folksinger Michael Johnathon originally launched the show. Since then, it has been seen in millions of homes across North America on PBS-TV (regionally on KET), nationally on RFD-TV, along with tens of millions more on YouTube videos. More than 60,000 fans have attended the broadcast tapings of WoodSongs at the Lyric Theater in Lexington, Kentucky.

“We were not sure what to do with the old sign,” explained folksinger Michael Johnathon, creator and host of the syndicated broadcast. “We called it ‘Franken-Sign’ because it was repaired so many times. But so much history belonged to it. We did not want to cut it up and sell it … we wanted to find a permanent resting place for it.”

The WoodSongs sign has become a major symbol of Kentucky media history alongside the Renfro Valley Barn Dance and others, and will be on permanent display along with a video presentation of the history of WoodSongs, a tribute to the amazing volunteer crew that made this happen.

Thanks to the kindness of an audience member, WoodSongs has since replaced the original sign with a brand new stage sign.

“The Kentucky Music Hall of Fame exists to preserve and promote the rich musical heritage of Kentucky and its people,” said Emily Bullock of the Kentucky Hall of Fame and Music Museum. “It is only fitting that a Woodsongs display would find its home in our museum with such a meaningful history and contribution to music in Kentucky and across the world.”

About WoodSongs Old Time Radio Hour:
WoodSongs Old Time Radio Hour is an all volunteer, live audience celebration of grassroots music and the artists who make it. Produced 44 Mondays per year from the historic Lyric Theatre in Lexington, Kentucky, the show airs worldwide on 537 radio stations from Australia to Ireland, and across the United States. It is also aired on American Forces Radio Network twice each weekend in 177 nations, and on every military base and US Naval ship around the world. It is also broadcasted into millions of homes as a PBS-TV series on KET in Kentucky, and on Friday and Wednesday’s on RFD-TV, America’s Most Important Rural Network.

About Kentucky Music Hall Of Fame:
The Kentucky Music Hall of Fame and Museum joined Renfro Valley as a premiere tourist attraction, opening in 2002.  The entrance to the building is unique to any other museum as it was once the original riding stables of John Lair. The museum is filled with a collection of artifacts and memorabilia highlighting the careers of over 50 inductees.  A common misconception is that the Kentucky Music Hall of Fame focuses mainly on country and bluegrass related artists, however there are inductees from all genres of music including The Backstreet Boys, Loretta Lynn, Florence Henderson, Rosemary Clooney, Keith Whitley, Boots Randolph and so many more. You can also learn the history of music dating back to the 1700’s or pick up area information in the visitor center located in the museum lobby.  The Kentucky Music Hall of Fame is open daily, year round.

About WoodSongs Front Porch Association:
WoodSongs Front Porch Association is an international network of “front porch” minded musicians, songwriters and fans who simply love simple, rural music. This organization is about EVERYBODY who loves to pick, play and sing. If you feel the music business left you behind, join us. We will show you how to make music a powerful part of your life, even if it is not your livelihood. WFPA’s mission is to help music lovers find a new, defined direction for their music. To gather the global community of front porch minded musicians and help them do good work, bring roots music education into schools free of charge, and enhance communities by redirecting the tremendous energies of local musicians. We call our members “SongFarmers.” 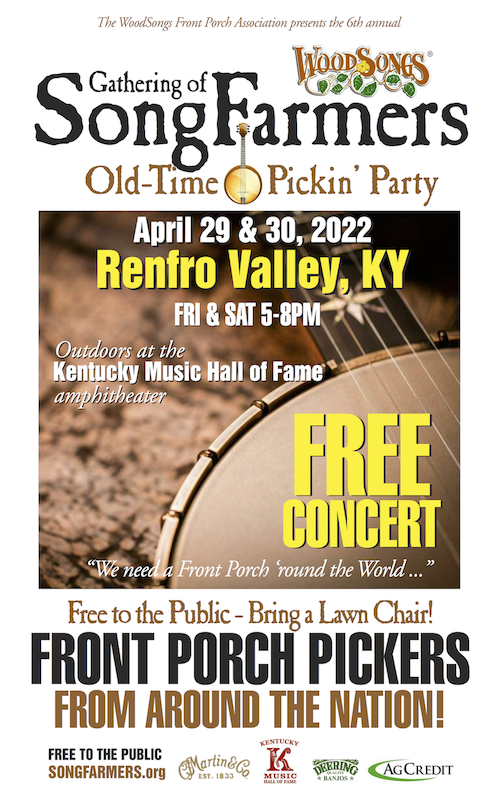