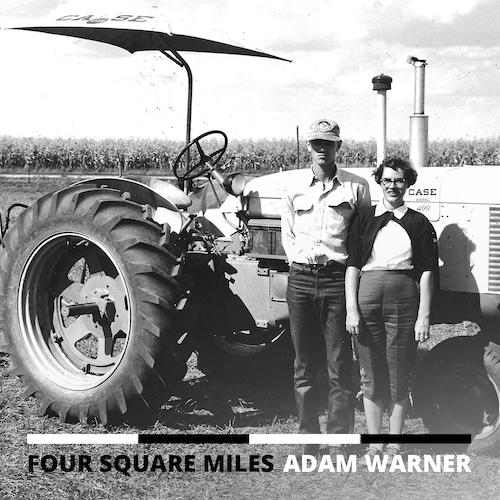 NASHVILLE, Tenn. – Country music singer-songwriter Adam Warner released his latest single “4 Square Miles” in September. Since that time, the traditionally inspired country song’s music video has organically racked up more than 100,000 views [click to watch], firmly staking its claim as being a fan favorite which the troubadour Marine veteran has released to date.

A country boy at heart, Warner returned to his family’s 5th generation farm just outside of his hometown of Lawrenceville, Illinois to capture the visual elements which bring the song’s authenticity to life. The inspiration behind the masterpiece ode is also Adam’s heartfelt tribute to his best friend, mentor and Grandfather, Fred Wright.

“This song represents many of life’s philosophies which I hold dear to my heart,” said Warner. “The importance of family, home, heritage and hard work. My grandpa Fred embodied all of those things. I am blessed to share this song with folks everywhere in hopes that it resonates with them and takes them back to their own Four Square Miles.”

The release of “4 Square Miles” follows the recent release of his honky-tonk jam “That’s How You Know You’re Livin,” in March, and the patriotic anthem “Semper Fi,” a duet he recorded with iconic country artist Trace Adkins, which proudly pays tribute to his Marine Corp heritage, and Marines everywhere. “Semper Fi” won Best Country Song at the 2019 Independent Music Awards.

Adam Launches Beer:30, Every Monday on YouTube LIVE:
Adam also recently launched a weekly social media live-streamed music variety show called Beer:30, playing off his own song of the same name. Streaming via his YouTube channel every Monday evening at 7:30p ET / 6:30p CT, Beer:30 brings Adam together with his band for several live performances, plus feature interviews and live performances with other artists from Nashville. Pilot episodes featuring Lewis Brice, and Josh Gallagher are streaming now, with upcoming episodes when Adam will be joined by Dixie Jade, Brassfield, Aly Cutter and Manny Blu.

About Adam Warner:
Adam Warner comes from a family who have been family farmers for more than 100 years, and he grew up with men who served in the U.S. Military. He found an early love for music and played in bands throughout high school. Influenced by his favorite singers, including Johnny Cash, Waylon Jennings, George Jones and Hank Williams Jr. and Sr., he started writing songs and continued to perform until he took a break from music while in college to join the U. S. Marines for five years. As soon as he could after his discharge, Warner moved to Nashville, where he was soon back to writing songs and entertaining fans. It was obviously the right decision, because country star Trace Adkins heard about him and invited Warner to open his shows. Warner had heard Adkins’ hit “Semper Fi” when he was in the Marines and told Adkins he would like to record the song, and Adkins agreed to duet on it with him. The song won Warner the Vox Pop award for Country Music Song of the Year at the 17th annual Independent Music Awards in June of 2019. Warner and buddies Quinn Loggins and Trafton Harvey wrote “Welcome to the South,” which has become the theme song for the NFL team the Tennessee Titans, who turned it into a video they play before each of their games in Nashville. Warner has released an EP, Can’t Get Enough, and his first studio album, Big Storm, which resulted in him being heralded by critics as a welcome return to traditional country with songs that are mini-movies about every-day life. He is now working on his next project, which he says will stay in the same realm, but as the Marines taught him, will show growth in his music.