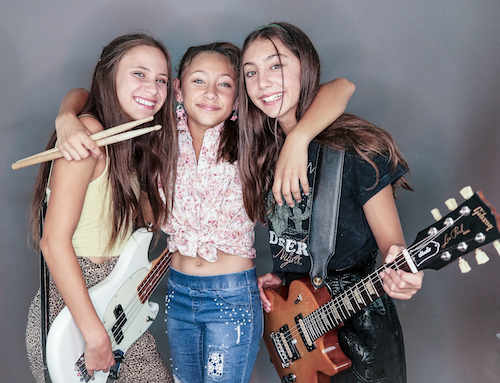 Plus, a guest appearance on Starlight Children’s Foundation upcoming live-streamed show with Captain Starlight on Friday, Nov. 20 at 10pm ET (U.S) at Facebook.com/StarlightAustralia

“We are super excited to take part in these awesome streamed events for such worthy causes,” said Grace Mason. “We feel it’s important to take every opportunity we can to give back with our music. We love making people around the world smile, so this is a win-win for everyone!”

Launched October 23, Hovid Povid, based on the children’s story Hocus Pocus (bit.ly/HovidPovid) is a crowd-funded fan film created during the Halloween season of 2020 which Hello Sister makes a cameo in. To keep the Trick-or-Treat for UNICEF annual fundraiser [click to view or give] safely produced during the COVID-19 pandemic, the final production resulted in fans and creators from all around the world recreating the entire film without stepping foot in the same room.

On Saturday, November 7, Hello Sister will be one of the featured performers for the Unlock Virtual Festival (UnlockFestival.co.uk) which aids The Prince’s Trust ‘Million Makers.’ Organized by NBCUniversal International (NBCUI), the Unlock Virtual Festival launched its first series of performances on Saturday, October 17. Hello Sister joins more than 250 musical artists, comedians and other influencers from around the world along with show hosts Atomic Kitten Liz McClarnon, new Trinidad and Tobago ‘chilled calypso’ artist Kalpee, and CMA award winning radio and TV broadcaster, Baylen Leonar.

What: Hello Sister on Unlock Virtual Festival
When: Saturday, November 7 at 5pm ET
Where: Online, streaming via YouTube Live

Then, on Friday, November 20 they’ll officially kick off a partnership with Starlight Children’s Foundation of Australia (Starlight.org.au), where they’ll be featured guest performers on a Facebook Live streamed show which also broadcasts across the Starlight TV network in children’s hospitals throughout Australia. Along with show host Captain Starlight, Hello Sister will perform three of their original songs and play an American vs. Australian slang word game called Lost In Translation, which will surely cheer up the children in poor health throughout Australia.

What: Hello Sister with Captain Starlight on Starlight TV
When: Friday, November 20 at 10pm ET
Where: Online, streaming via Facebook Live (@StarlightAustralia)

About Hello Sister:
Hello Sister is an authentic pop rock n’ roll band driven by three siblings’ spirited chemistry and dynamic homegrown musicianship. Growing up just north of Orlando, the girls’ individual and collective love of music was inspired and encouraged by their father Tim, a former songwriter and Pop R&B artist who charted songs on Billboard in the 90’s in both Canada and Europe. Hello Sister’s musical influences are quite expansive and include everything from Johnny Cash to Taylor Swift, Keith Urban, Avril Lavigne, Shawn Mendes, Norah Jones and Kelsea Ballerini.