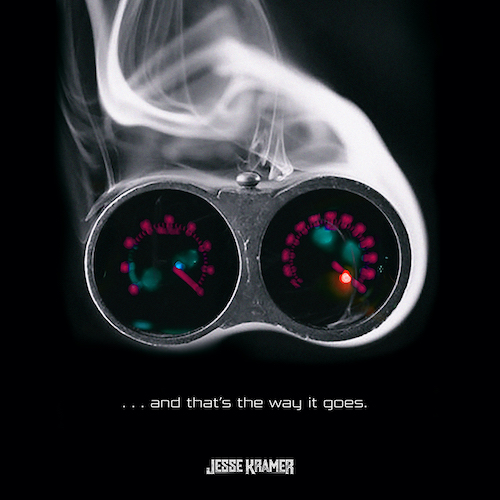 NASHVILLE, Tenn. – Rock n’ Roll singer and songwriter Jesse Kramer is fired up with the announcement of the release of two new songs, his first song video, and the launch of his brand new live-streaming platform JesseKramer.tv, beginning Friday, October 23.

First, Jesse will release his soulful reworking of Lady Gaga’s pop hit “Bad Romance” via his website at TooMuchSoulForNashville.com, along with a lyric video on his YouTube channel. Just this past June, during his audition on NBC’s America’s Got Talent, the Nashville-based musician received a standing ovation from the studio audience, praise from Simon Cowell and a unanimous invitation to return back by the show’s judge panel for his authentic take on the pop hit [click to watch].

Today, American Songwriter Magazine exclusively premiered a first listen of his original tune “Ridin’ Shotgun” at AmericanSongwriter.com ahead of the song’s official release on Friday, October 30 across all digital platforms. Plus, veteran music journalist Tricia Despres chats with the emerging rock n’ roll revivalist about his growing career as a songwriter.

“‘Ridin’ Shotgun’ was a breakthrough for me to tell it like it is with no regrets,” Kramer said. “It’d given me inspiration to follow through with my perspective and continue the Rock n’ Roll tradition. Without sass you’d have a flat ass groove, so this song is all about having that attitude!”

Jesse is also set to premiere a new concept video for “Ridin’ Shotgun” on Wednesday, Nov 4 via his YouTube channel. Shot inside a Nashville auto junkyard, the video candidly affirms the young rock n’ rollers’ grungy and straight forward musical style – with guitar in-hand – and his renegade persona which he continues to firmly lay the groundwork for.

“Whether I’m the driver or passenger, the voice on my left has the wheel,” Kramer continued. “Buckle up because the pedal is put to metal on this ride!”

About Jesse Kramer:
Jesse Kramer is a multi-faceted singer and songwriter from Indianapolis who is determined to kick-start the rebirth of rock n’ roll for the modern world. Now residing and working out of Nashville, the up-and-coming 24 year old aspiring musician perfectly balances elements of rock n’ roll, soul and R&B music, something he now refers to as “The Jesse Kramer Sound.” With recent appearances on NBC’s America’s Got Talent, and FOX’s The Four: Battle For Stardom, music fans across America were introduced to Jesse’s gritty and truly genuine style of songcrafting and showmanship. With an arsenal of more than 100 originally composed songs, Kramer stays busy writing, recording and producing his own music from his Nashville home studio. Jesse has only scratched the surface to introducing the creative genius within to his growing legion of fans.  In 2019 he released his first EP of originals, Breakthrough, along with his second in 2020, Quarantunes (part 1/2). In the Fall of 2020, Jesse will drop two new singles, and once again prove to music fans around the world that rock n’ roll is not dead.