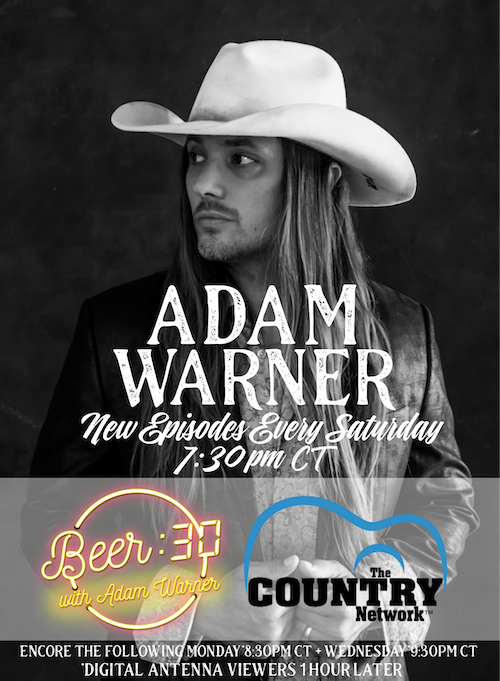 ‘Beer:30 With Adam Warner’ Now Streaming On The Country Network With New Episodes Premiering Weekly On Saturdays & Encores On Mondays & Wednesdays Through December

NASHVILLE, Tenn. – Country music recording artist and U.S. Marine veteran Adam Warner is both proud and humbled to announce his music show series Beer:30 with Adam Warner, made its network TV debut on Saturday, October 2 on The Country Network. Encore airings are scheduled weekly on the TCN App; Mondays at 9:30p ET / 8:30p CT and Wednesdays at 10:30p ET / 9:30p CT, with new episodes premiering weekly on Saturdays at 8:30p ET / 7:30p CT through December. The new show will also be made available for on-demand viewing via The Country Network’s app on Roku, PlayStation, iPhone, or at watch.tcncountry.net/home. Over the air (OTA) TV networks broadcast true to the time zone the viewer is in. Check your local listings for details or visit tcncountry.net/where-to-watch.htm

TCN broadcasts over the air and cable in 51 markets with DMA households of 40 Million, while also streaming on your favorite platforms. Each episode will also be made available for as on-demand content using The Country Network’s app. For the complete list of broadcast methods, visit here.

Adam first launched his music variety show in 2020 via his social media channels in response to the pandemic shutting down live music everywhere. He also launched Beer:30 LIVE, an in-real-time jam session with him and his band. Beer:30 LIVE will continue to live-stream intermittently throughout the year on Adam’s Facebook page (@AdamWarnerMusic), YouTube channel, and Twitch channel.  He’ll preview the new episodes on TCN, along with playing his own music with his band. Nashville’s Center Stage Magazine will also continue to cross-stream Beer:30 LIVE via their Facebook page (@centerstagemag) along with their other cross-stream partner affiliates.

“I’m very excited to have my show Beer:30 picked up by The Country Network,” Warner said.  “What’s crazy to me is that this show started as a simple way to stay in touch with my fans that wanted to see live country music. Now it will be reaching millions of households around the world via TCN. That’s just amazing to a country boy like me!”

About Adam Warner:
Adam Warner comes from a family who have been family farmers for more than 100 years, and he grew up with men who served in the U.S. Military. He found an early love for music and played in bands throughout high school. Influenced by his favorite singers, including Johnny Cash, Waylon Jennings, George Jones and Hank Williams Jr. and Sr., he started writing songs and continued to perform until he took a break from music while in college to join the U. S. Marines for five years. As soon as he could after his discharge, Warner moved to Nashville, where he was soon back to writing songs and entertaining fans. It was obviously the right decision, because country star Trace Adkins heard about him and invited Warner to open his shows. Warner had heard Adkins’ hit “SemperFi” when he was in the Marines and told Adkins he would like to record the song, and Adkins agreed to duet on it with him. The song won Warner the Vox Pop award for Country Music Song of the Year at the 17th annual Independent Music Awards in June of 2019. Warner and buddies Quinn Loggins and Trafton Harvey wrote “Welcome to the South,” which has become the theme song for the NFL team the Tennessee Titans, who turned it into a video they play before each of their games in Nashville. Warner released an EP in 2020, Can’t Get Enough. He then followed with his first studio album, 2020’s Big Storm, where his single “4 Square Miles” was widely received by his fans, and secured him nods from many music industry tastemakers and spins at country radio. The song is dedicated to his grandfather Fred who passed away, along with growing up on his 5th generation family’s farm in Illinois! The song’s video climbed to #1 in 2021 on The Country Network’s Top 20 Countdown Show. He is now working on his next project, which he says will stay in the same realm, but as the Marines taught him, will show growth in his music. 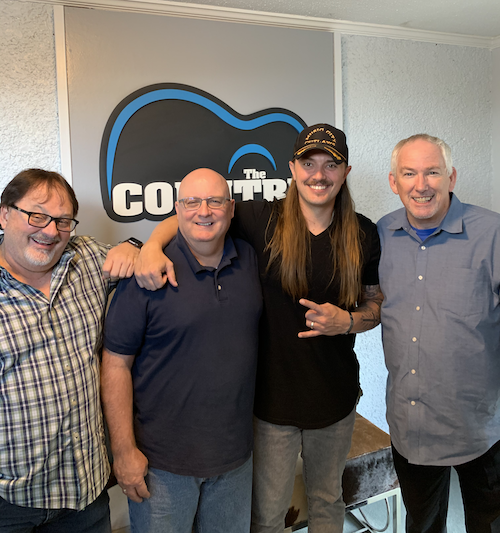 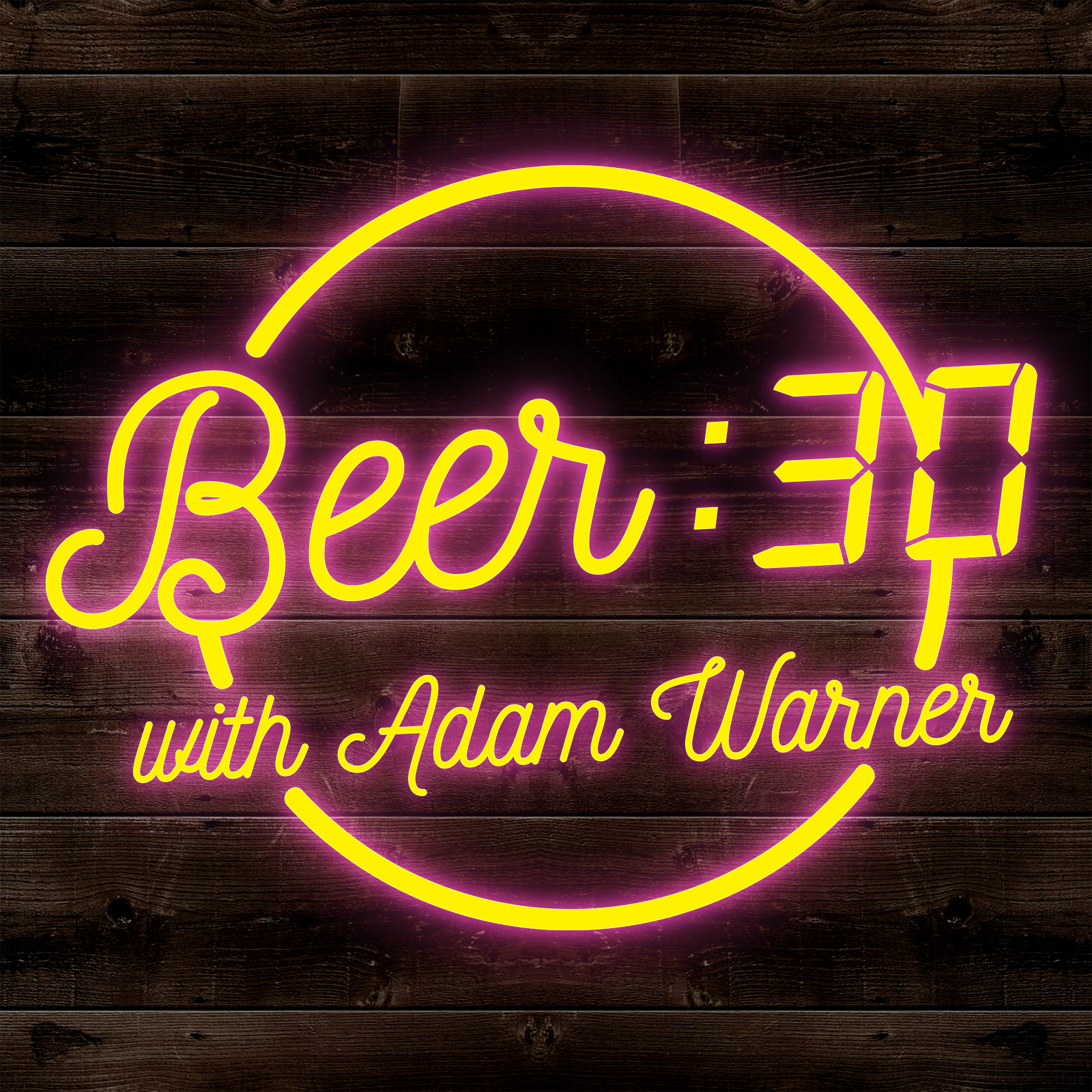 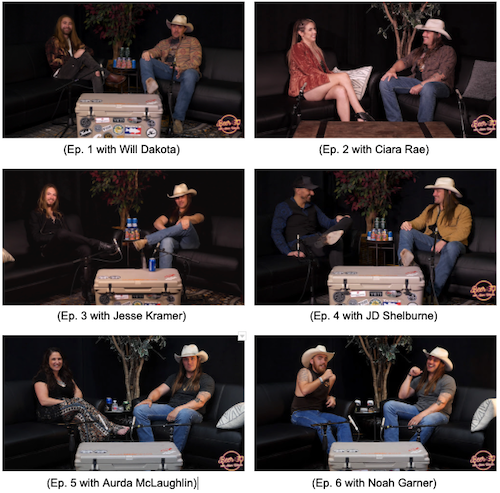