NASHVILLE, Tenn. (May 23, 2022) – Beginning Wednesday, June 1 Country Road TV (CRTV) will welcome the addition of folk singer Michael Johnathon’s WoodSongs Old Time Radio Hour to their highly-acclaimed lineup of country music and lifestyle themed TV programming. Kicking off what will be known as ‘WoodSongs Wednesdays,’ the premiere episode to begin streaming will be WoodSongs’ 1000th show featuring America’s favorite cowboys, Grand Ole Opry members Riders In The Sky, with an incredible WoodSongs’ Kid, the tween yodeling cowgirl Phoebe White. The June 1 premiere episode will stream for FREE in its entirety on CRTV’s Watch Now page for anyone, with new shows from the WoodSongs’ video vault being added weekly across CRTV’s paid platform.

“The evergreen quality of WoodSongs matches up perfectly with our audience,” said Adam Black, Co-founder & COO of Country Road TV. “Our audience will appreciate the heart and quality in each episode of WoodSongs and will want to watch it over and over again. We are beyond delighted to partner with Michael and this exceptional program.”

“It’s a celebration of the music from America’s front porch,” says Michael Johnathon from his own log cabin front porch in Kentucky. “It’s about the artists and songs and spirit of rural America driven by the excitement and power of a live audience. Viewers on Country Road TV get to sit back and let the cares of the world drift away as we take a step back into the tradition of old-time radio, but with a fresh approach. It’s a live audience radio show filmed for television.”

About Country Road TV:
Country Road TV is your unlimited one stop for all things True Country Music. We celebrate the legacy of Country Music by spotlighting the great and colorful performers, both past and present, who made original country music what it is today. Just some of the shows you’ll receive are Country’s Family Reunion, Larry’s Country Diner, The Joey & Rory Show, Marty Robbins Spotlight, and WoodSongs Old Time Radio Hour with new content added every month.

About WoodSongs Old Time Radio Hour:
WoodSongs Old Time Radio Hour is an all volunteer, live audience celebration of grassroots, bluegrass, country and folk music and the artists who make it. Produced 44 Mondays per year from the historic Lyric Theatre in Lexington, Kentucky, the show airs worldwide on 537 radio stations from Australia to Ireland, and across the United States. It is also aired on American Forces Radio Network twice each weekend in 177 nations, and on every military base and US Naval ship around the world. It is also broadcasted into millions of homes as a PBS-TV series on KET in Kentucky, Friday’s on RFD-TV, America’s most important rural network, and streaming on Country Road TV. 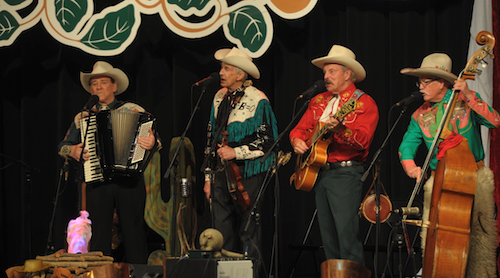