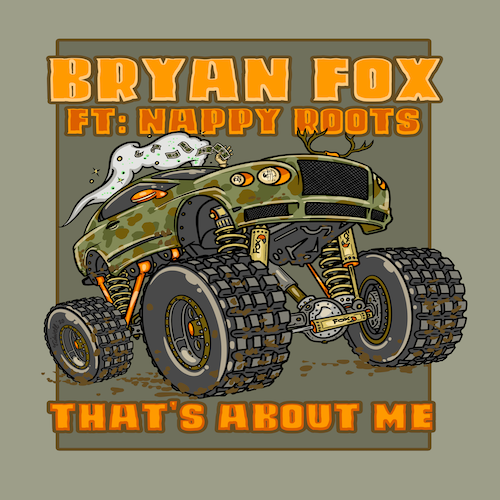 “This song is as Country and Kentucky as it gets! Love it!”
–Greg Almond, Program Director, Goober 95.1 WGGC

“That’s About Me” is the 3rd collaboration between Fox & Nappy Roots; available everywhere digitally NOW at: smarturl.it/ThatsAboutMe

Creativity, inclusion and a strong sense of family runs deep in the Fox household, so that’s why the country rocker’s teenage daughters, Dylan (16) and Pepper Fox (14) created most of the artwork used in the song’s animated lyric video. The PG-themed video was produced and directed by Clayton L. Luce of Darkstar Production Company, with additional artwork and theming also provided by renowned Louisville-based artist Jeral Tidwell, of HumanTree.com.

“Working with Nappy Roots has provided some of the most memorable experiences I’ve ever had in the studio,” said Fox. “It’s pure joy. It has an ease to it that just isn’t always the case when working with other artists, much less those in a completely different genre than you. The energy and camaraderie is undeniable.”

About Bryan Fox:
Bryan Fox exploded onto Kentucky’s music scene in 2000 when his alt-rock band End Of Me earned heavy radio airplay in his hometown of Louisville. His songwriting style evolved after beginning to work with acclaimed Nashville producer Malcolm Springer, transitioning to a solo country songwriter. He’s recorded two studio albums, Big City Lights (2010) and It’s Gonna Be That Kind of Night (2016) to fan and critic acclaim. Fox’s collaborations with GRAMMY nominated Nappy Roots has demonstrated his diversity as a songwriter and artist. In 2020, he is set to release his third solo country album, which features “That’s About Me,” Fox’s third collaboration with members of the iconic Southern hip hop group, recorded in Nashville’s House of Blues studios.