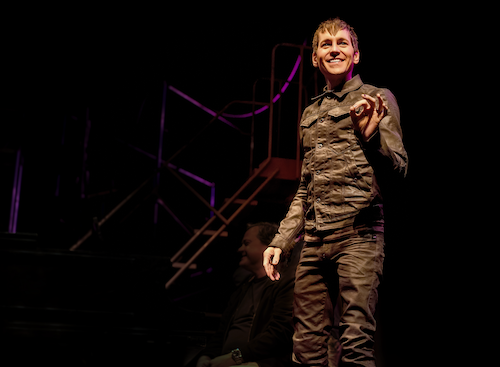 NASHVILLE, Tenn. – Multi-talented recording artist and accomplished Broadway star Tony Vincent, who leads Nashville’s PCG Theatrical for young and aspiring musical theatre performers, has transformed his Masterclass training program to adapt to social distancing guidelines in response to the COVID-19 pandemic. What was once an intensive face-to-face program based out of Nashville has now evolved into an equally interactive, ZOOM-based live-stream experience, enabling Vincent and his team the ability to personally work with ambitious young performers from around the world in the comfort of their own domain. Vincent, along with his fellow verteran Broadway production team in both New York City and Nashville, are breaking new ground in the entertainment industry amidst the COVID-19 pandemic with the development of their online masterclass training model.

“Our entire PCGT team of providers has seamlessly shifted to custom, online training of tomorrow’s Broadway talent,” Vincent said. “We are now able to coach our students without the need for travel to Nashville, and they’re receiving the same personalized curriculum that they would get while in the same room with us.”

For more than 20 years Tony Vincent has starred in multiple Broadway theatrical hit productions such as Rocktopia (lead vocalist), RENT (as Mark / Roger), Green Day’s American Idiot (as St. Jimmy) and Sir Andrew Lloyd Webber’s revival of Jesus Christ Superstar (as Judas). Vincent also performed in Queen’s We Will Rock You (as Galileo Figaro) on London’s West End, and has even fronted with the surviving members of Queen on several occasions, most notably his epic performance of “Bohemian Rhapsody” for Queen Elizabeth II‘s “Golden Jubilee” for more than 1 million fans surrounding Buckingham Palace, and televised to nearly 300 million worldwide.

When Tony Vincent isn’t on Broadway or performing on stages all over the world, he is writing and recording his own songs and producing the music of other aspiring artists of pop and alternative  genres. After working more than 20 years in New York City, Vincent relocated to Nashville to launch and oversee PCG Theatrical, where he leads a team of experienced Broadway choreographers, vocal coaches and acting instructors, where they transform young aspiring musical and theater students into full-fledged theatrical performers by way of a tailored program to each student’s individual needs.

“I have always loved working with up-and-coming musical theater talent,” said Vincent. “My masterclass musical theater training program is literally customized for each talent that I work with. In person— and now online— myself and my team of expert coaches will arm our clients with every skill they need to become successful in the world of professional musical theatre.”

“The ability to shift our programs to an interactive, online format is an amazing testament to the hard work of our staff, providers and coaches at PCG,,” said PCG Founder & CEO, Bernard Porter. “I am deeply grateful for their commitment and dedication to dig deep and do what it takes to continue providing the exceptional service and standards our artists expect from us in spite of the challenges. It is an honor to work with people so devoted to their craft and developing artists. Tony Vincent is no exception! We are thrilled to partner with him in offering PCG Theatrical online and continue the great work of developing the stars of tomorrow.”

About Tony Vincent:
From a young age he was exposed to the music of The Beatles and in his early teens Vincent began playing drums and writing songs heavily influenced by Depeche Mode, New Order and David Bowie. While attending university, Vincent recorded a five-song EP, which led to a recording contract with EMI records. The two solo albums (Tony Vincent, One Deed) followed producing six #1 Billboard radio hits.

In 1998 Vincent took a detour into the world of rock-based theater, joining the Broadway cast of RENT. Sir Andrew Lloyd Webber hand-picked Vincent to play the role of Judas Iscariot in the 2001 revival of Jesus Christ Superstar. In 2002 Vincent originated the role of Galileo Figaro in the rock band Queen’s smash hit We Will Rock You on London’s West End then returned to Broadway in the role of St. Jimmy in Green Day’s American Idiot (Broadway). He has fronted for Queen on several occasions, including a performance of “Bohemian Rhapsody” at Queen Elizabeth’s Golden Jubilee for the royal family and 300 million viewers worldwide. Tony is also known for being a finalist on the second season of NBC’s The Voice.