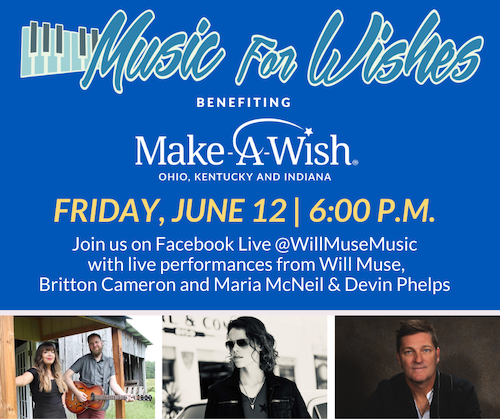 Watch live on Friday, June 12 at 6pm ET at Facebook.com/WillMuseMusic

SOMERSET, Ky. – Prodigy teen pop songwriter and Somerset native Will Muse is excited to announce the continuation of his fourth annual Music For Wishes charity concert on Friday, June 12 at 6pm ET. The FREE-to-watch charity show will feature performances given by Will Muse, and fellow Kentucky songwriters Maria McNeil with Devin Phelps, and Britton Cameron. Music For Wishes  is going virtual for the first time on Facebook Live @WillMuseMusic, with 100% of the show’s donated proceeds directly benefiting Make-A-Wish® Kentucky.

“Due to the current pandemic, we have sadly not been able to hold an in-person event this year,” said Muse. “The fourth annual Music for Wishes will be an online livestream. Make-A-Wish is near and dear to my heart, so my goal is to raise as much money as possible for the six children with pending wishes in the Somerset area. Despite the crisis we are going through, there are still many children waiting on life-changing wishes. I am very excited to be joined by the talented Britton Cameron along with Maria McNeil and Devin Phelps.”

Music For Wishes has raised more than $85,000 for Make-A-Wish® Kentucky since its inception in 2017, and has been made possible by the generous support of the Somerset community, which Muse, his mother Allison, and a dedicated committee of volunteers coordinate together. Past musical performance guests have included Grand Ole Opry member Pam Tillis, along with Molly Porter, Towne, Maria McNeil, The Broken Locals, and Britton Cameron.

“Will is an extraordinary young man who saw a need in his community and stepped up to meet that need,” said Make-A-Wish Ohio, Kentucky & Indiana President and CEO Stephanie McCormick. “Many of the wishes we grant are for children Will’s age. To see him giving back to his peers is incredibly heartwarming and we’re so fortunate to call him a part of the Make-A-Wish family.”

Will Muse Releases “World In The Way”
The übertalented Kentucky teen also recently released another song with an inspirational message that is not only timely, but very much needed as the world combats the COVID-19 pandemic. Aptly named “World In The Way,” it’s his first duet with Nashville-based singer Steevie Steeves from indie-folk trio Towne. The provocative tune once again showcases Muse’s smooth vocals, raw emotion, and his ability to pull listeners in by transforming his song’s message into a well-received calling for people to follow, especially during times of need.

“World In The Way” is available everywhere today digitally at lnkfi.re/worldintheway, along with the song’s video which can be watched at WillMuseMusic.com or his YouTube page.