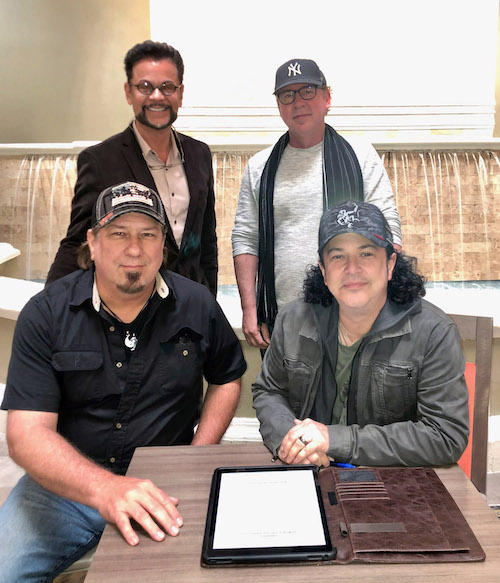 “I am very excited to be working with Mark Lorenzo and the rest of the guys in Southbound 75,” said McDermott! “I am really looking forward to great things happening for these guys. Lorenzo’s songwriting abilities are just flat-out remarkable as an artist.”

Southbound 75 also treated their fans with a brand new lyric video for the album’s first single “Not Ready To Say I’m Sorry Yet,” premiering it by way of Nashville’s Center Stage Magazine and the band’s YouTube channel (https://youtu.be/GOerGxjuKAc). The catchy country rock tune is also available NOW on all popular digital platforms including Apple Music, Spotify, YouTube Music, Pandora and Deezer. To listen now, click here.

“Not Ready To Say I’m Sorry Yet” introduces songwriter Mark Lorenzo’s ability to craft a cleverly written song about dealing with the immediate personal feelings born out of heartbreak, an established theme at the very core of many great country & rock songs.

“The whole song started with the first line, ‘What you are to me is a cell phone full of pissed off memories…’ and the whole song was done in an hour because it was true. I knew I was wrong but I wasn’t ready to admit it. I think that song just resonates well with our fans live. We always knew it was going to be the first single.”

Southbound 75 was recently named as Best New Country Band by The Tampa Bay Musicians Network. This early nod of endorsement comes by way of the band’s lineup of seasoned professionals, led by singer/songwriter Mark Lorenzo, who is backed by bandmates Kevin Doris on strings, Vance Eskesen on bass, and Gregg Giacobbe on drums.

“We have really taken our time to record these songs,” Lorenzo explained. “What has happened is that we have created a kind of ‘best of’ album, even though this is our first official release as a band. These are really my favorite songs I have ever written!”

Southbound 75 played their first show in December 2018 and have steadily made a name for themselves, having toured throughout their home state of Florida, and throughout the Midwest.