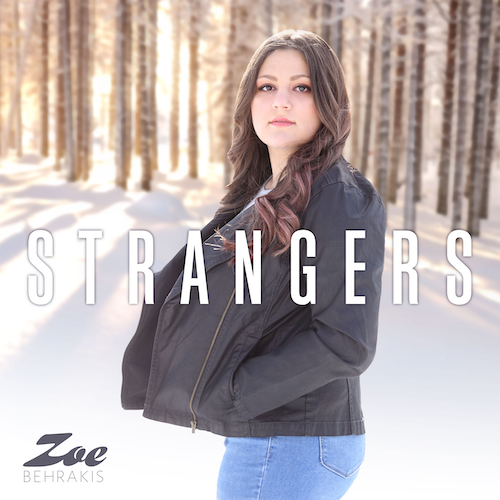 “I think a lot of people out there have had a friend or romantic partner at some point in their life which just didn’t feel right, or who didn’t bring out the best in you,” says Behrakis. “So this is a song about just saying goodbye to those kinds of people and situations. Like the song goes, ‘we’re better off as strangers’…”

Zoe is currently studying Psychology at Boston College where she is also a member of premiere student a cappella group, The Bostonians. She was invited to join the prestigious group as a freshman, and plans to remain through graduation. Additionally, Zoe’s taped singing of the National Anthem is currently being played at Boston College’s home Men’s & Women’s Basketball games, and Men’s Hockey games.

Her emergence and debut as an up-and-coming pop artist is fueled by her 2019 acceptance into the Emerging Artist Development program by nationally recognized performing arts development firm, PCG Artist Development, headquartered in Nashville and led by accomplished music executive Bernard Porter.

“Zoe Behrakis is a multi-talented, positive light in a world that so greatly needs someone like her right now,” said Bernard Porter of PCG Artist Development. “She’s a tremendous new talent who pop music lovers will be able to relate to!”

About Zoe Behrakis:
Zoe Behrakis first realized she wanted to become a pop singer and songwriter amid giving living room concerts for her parents throughout her adolescence while growing up in the Bostonian suburb of Sudbury, Massachusetts. Drawing inspiration from a diverse group of pop music icons like Whitney Houston and Queen, to Selena Gomez and Frank Ocean, Zoe has set her sights on what’s next for her music career. In 2019, she began writing and working with some of the most sought-after music coaches, songwriters and producers in Nashville’s diverse music scene after being discovered by PCG Artist Development. She’s now working with a pair of GRAMMY-nominated studio aces; Johnny Black and Mike Piazza who are producing her new music. Zoe’s debut single “Grace” is a moving song about overcoming life’s challenges and coming out on the other side better, stronger and more confident. She followed with “Echo,” which released in September 2020, and she’s now readying her third song, “Strangers” available everywhere digitally on February 19, 2021. The new music builds upon Zoe’s thirst for crafting meaningful pop melodies which find common ground with her growing fanbase. Zoe is also a member of Boston College’s premier acapella singing group, The Bostonians, where she is currently studying Psychology. Visit ZoeBehrakisMusic.com to learn more.