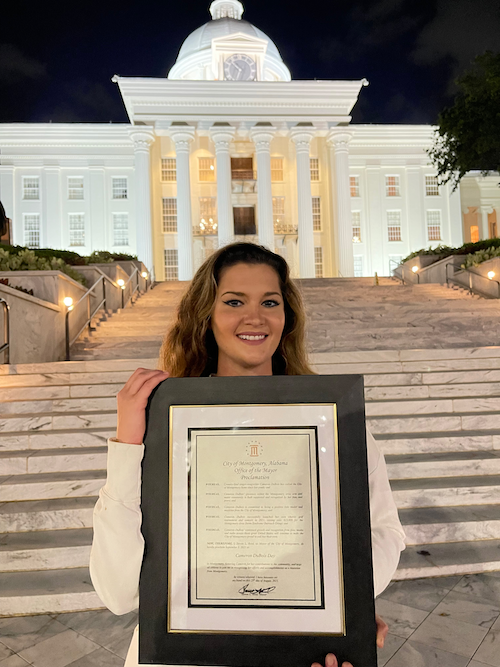 MONTGOMERY, Ala. – Country rock singer-songwriter Cameron DuBois was recently honored by Mayor Steven L. Reed with a proclamation declaring September 3rd as ‘Cameron DuBois Day’ in the rising country star’s hometown of Montgomery, Alabama. The proclamation comes on the heels of her very first charity golf tournament where she and her team raised more than $15,000 for the Montgomery Area Down Syndrome Outreach Group.

WHEREAS, Country-Soul singer-songwriter Cameron DuBois has called the City of Montgomery home since her youth; and

WHEREAS, Cameron DuBois’ presence within the Montgomery area arts and music community is both supported and recognized by her fans and peers; and

WHEREAS, Cameron DuBois is committed to being a positive role model and musician from the City of Montgomery; and

WHEREAS, Cameron DuBois successfully launched her own charity golf tournament and concert in 2021, raising over $15,000 for the Montgomery Area Down Syndrome Outreach Group; and

WHEREAS, Cameron DuBois’ continued growth and recognition from fans, media and radio across these great United States, will continue to make the City of Montgomery proud to call her their own;

NOW, THEREFORE, I, Steven L. Reed, as Mayor of the City of Montgomery, do hereby proclaim September 3, 2021 as ‘Cameron DuBois Day’ in Montgomery, honoring Cameron for her contributions to the community, and urge all citizens to join me in recognizing her efforts and accomplishments as a musician from Montgomery.

About Cameron DuBois:
Cameron DuBois is an authentic country, soul, and southern rock singer-songwriter from Montgomery, Alabama. She’s spent most of her time developing her own unique brand of sound in two prestigious American South musical destinations; Nashville and Muscle Shoals, Alabama. She’s spent numerous hours along those muddy banks of the Tennessee River, collaborating with two of the industry’s notable songwriters and producers in Michael Curtis (Randy Travis, Fleetwood Mac, Blake Shelton) and Cindy Walker. Cameron’s unique country-rock-soul hybrid sound has kept her busy performing throughout Alabama and the south, landing her opening gigs with Dylan Scott, Neil McCoy, Thompson Square, Easton Corbin, John Michael Montgomery, and Andy Griggs. Cameron’s single releases include “The Home Place,” “Lipstick & Chrome,” “Never Love Me Back,” and “Peace,” which demonstrates her versatility. In 2020, she released her most ambitious song project yet, the up-tempo rocker “Bridges,” which exclusively premiered nationwide on The Country Network, along with being aired on The Heartland Network. Cameron has been featured by PASTE, Medium.com, Guitar Girl Magazine, Country Rebel, The Montgomery Advertiser, AL.com, WAFF-TV, WSFA-TV, & WAKA-TV. In 2021 Cameron scored her first #1 song on CDX’s Positive Country chart with her soulful “Modern Day Wonder Woman,” along with launching her very own charity golf event called Cameron DuBois’ Par-Tee Down Classic, where she raised $15,000 for the Montgomery Area Down Syndrome Outreach Group. For Cameron’s most up-to-date tour schedule and other information, visit CameronDuBois.com. 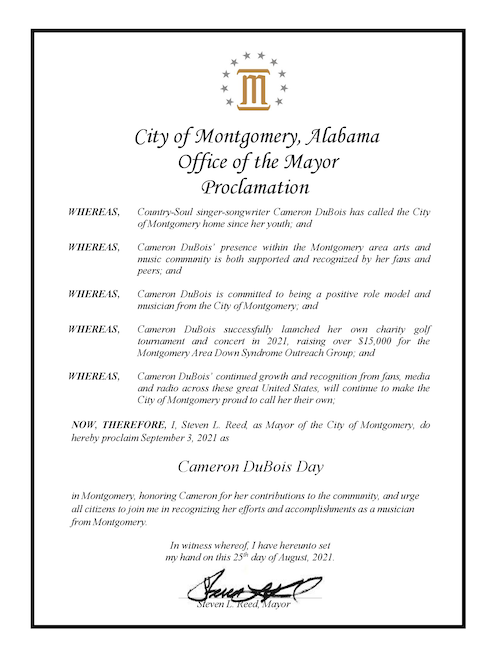