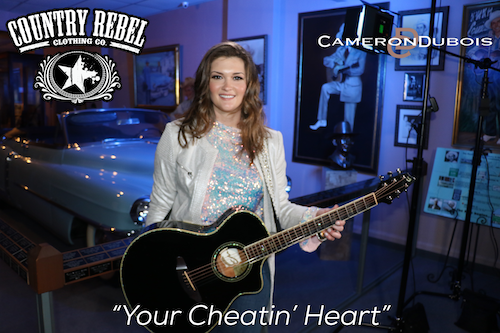 Plus, her new holiday song with Bama Sound “Merry Christmas, Wherever You Are” featured in PASTE Magazine’s Annual Holiday Sampler Playlist [Click to preview]

“Cameron DuBois’s new holiday song, ‘Merry Christmas, Wherever You Are,’ soulfully captures the melancholy of a lonely Christmas in a year that a lot of folks need an alternative to the constant barrage of holly-jolly.”
— Josh Jackson, Paste Magazine

MONTGOMERY, Ala. – Ascending singer-songwriter Cameron DuBois – a multistylist who’s equally country, soul and rock – exclusively premiered a live performance video with Country Rebel on December 15, singing “Your Cheatin’ Heart” from inside the Hank Williams Museum in her hometown of Montgomery, Alabama. Standing only a few feet from William’s iconic 1952 Baby Blue Cadillac, DuBois gives a soulful remake of the pioneering country singer’s 1953 hit song, released shortly after his untimely death.

“Having been raised in Montgomery, this is a huge honor to perform my version of ‘Your Cheatin’ Heart,’ right in front of Hank’s very own Cadillac,” said DuBois. “I’d like to thank the Hank Williams Museum for allowing me to film this special segment for Country Rebel. I also want to thank everyone who helped put this project together.”

DuBois has been on the rise in 2020, releasing three singles which show her depth as a singer-songwriter, including the uplifting “Peace” and the sassy rocker “Bridges,” whose Josh Sikkema directed video recently surpassed more than 1 million digital views, along with TV premieres on The Country Network and The Heartland Network.

On December 4 Cameron released her first original holiday song, featuring Bama Sound, called “Merry Christmas, Wherever You Are,” which was exclusively premiered by Guitar Girl Magazine. Described by PASTE Magazine’s Editor-In-Chief Josh Jackson as an “alternative to the constant barrage of holly-jolly,” it was also among their annual Holiday sampler collection [click to preview]. Produced by Muscle Shoals veteran Bill Hinds (Roy Orbison, Shenandoah, Sawyer Brown), the track is available everywhere digital music is sold and streamed.

“I’m very excited to announce the release of my first original Christmas single,” said Cameron. “Writing and recording this song with Rick Hansen and Bill Hinds makes it even more special to me as we have been doing a lot of writing together in 2020. This will be my very first single released that we have written and recorded together as Cameron DuBois & Bama Sound. So, Merry Christmas, Wherever You Are!”

About Cameron DuBois:
Cameron DuBois is an independent country rock singer & songwriter from Montgomery, Alabama. She’s spent most of her time developing her unique brand of sound in two prestigious American South musical destinations; Nashville and Muscle Shoals. The multi-talented 27 year-old has ventured on numerous occasions to the muddy banks of the Tennessee River, where she’s collaborated with two of the industry’s top songwriters and producers in Michael Curtis (Randy Travis, Fleetwood Mac, Blake Shelton) and Cindy Walker. Her unique country-rock-soul hybrid sound has kept her busy performing throughout her home state of Alabama, where she’s performed with Thompson Square, Easton Corbin, John Michael Montgomery, Dylan Scott and Neil McCoy since 2018. Cameron’s released a series of singles such as “The Home Place,” “Lipstick & Chrome,” “Never Love Me Back,” and “Peace,” all which equally highlight her diversity as a singer and songwriter. In October of 2020 DuBois released her latest single “Bridges,” produced by veteran Muscle Shoals Producer Bill Hinds, which continues to build upon her blossoming music career as an independent country singer-songwriter. To learn more about Cameron and for her most up-to-date tour schedule visit CameronDuBois.com.